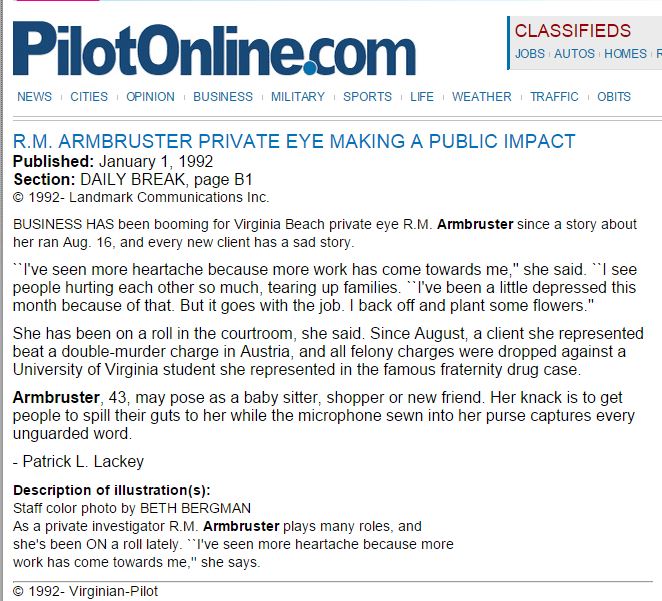 ON THE MOVIE screen, private eye V.I. Warshawski, played by Kathleen Turner, awakens to a messy apartment and groggily pulls on the dark sweats heaped on the floor by her rumpled bed.

In the audience, real-life private eye R.M. Armbruster of Virginia Beach nods her approval and whispers: “I keep my sweats by my bed, so I’m ready to go. My house is always dirty.” On the screen, Warshawski’s lover has been unfaithful, and she is soon on the prowl for a good man, or at least a good-looking man. When a likely specimen, a hockey player, passes near Warshawski’s booth in a bar, she hits him with one red-shoed foot, as though by accident.

In the audience, Armbruster again nods her approval. “Private eye women are very pushy,” she says. “My boyfriend calls me a pushy bitch.”

Back on the screen, Warshawski has slender, shapely legs – A New York Daily News writer called her a “glam-gammed gumshoe.”

On the screen, Warshawski explains why she goes by her initials: “It’s harder for a man to patronize you if he doesn’t know your first name.”

You don’t want to underestimate private eye Armbruster. Many have and wish they hadn’t.

R.M. Armbruster is the first choice of a number of local criminal and domestic lawyers when they want to know what the other side is thinking. People spill their guts to Armbruster, while the microphone sewn into her purse captures every word.

When Chesapeake policeman Bill Ragland was accused of sexual abuse, assault, and breaking and entering, his attorney, John W. Brown, hired Armbruster to dig out the truth. Posing as a member of an organization opposed to rape, Armbruster befriended the accuser and soon taped her telling a story that did not jibe with the tale she had told prosecutors. Ragland was acquitted last month.

Chris A. Christie, a criminal lawyer in Virginia Beach, has employed Armbruster for more than seven years. When he represented a man accused of raping his stepdaughter, he hired Armbruster to get the straight poop.

“She got statements primarily from the mother and daughter showing that in fact they had reason to lie and probably did lie,” Christie said. “We ended up winning the case.

“Her secret is her ability to create a character and a line that enables her to get the real story from people. She’s terrific in that regard, if you need a character to get on the inside.”

Glamorous, she is not. If she were, she said, strangers would be more wary. Instead she is comfortable, like a dear aunt. Nothing about her is threatening.

“I can knock on a door,” she said, “and find out everything you want me to find out about a person. People just love to talk to me. I love to talk to them, too. Sometimes, after they tell me everything, I still like the people. That’s really kind of weird.”

Mechanically inclined, she is not. Electronic gimmickry confuses her. She has no fancy lenses or listening devices. Her main tool is the tape recorder, and she has her youngest son, Bradley, her understudy, change the batteries in it.

Armbruster is working for some of the defendants in the fraternity drug case at the University of Virginia. She recently returned from Austria, where she testified for a defendant in a double-murder case in Poquoson. A prominent Virginia Beach woman has hired her to recover a stolen $100,000 heirloom.

A certified arms instructor, she teaches a state-approved 61-hour class for people who want to be private eyes. The charges, she said, are $400 for tuition and $100 for “books, badges and bullets.”

Back in 1982, when Armbruster was a part-time private eye, one of the first lawyers to hire her was Glenn B. McClanan, a member of the House of Delegates.

“I think she is very much for the underdog,” he said. “If it is a little man or woman that is being dealt with unfairly, that really gets the juices flowing.”

A plaque on her office wall, a gift from a client, says simply, “Equalizer.”

HER FIRST CASE
Armbruster was reared in Barberton, Ohio, a small town surrounded by dairy farms. She was 5 when her father was shot to death in a hunting accident. Her mother grieved 20 years,Armbruster said, and barred guns from their home.

At age 16, Armbruster, a cheerleader, married a 19-year-old football hero.

Good years followed, but at age 27, she learned her hero was unfaithful. “I cried and vomited for about a month,” she said. “I couldn’t hardly move. I was definitely the 1960s woman, who took care of her husband and her children.” She used to can 60 quarts of peppers a year and give them to relatives.

The husband moved out. She scrubbed houses and applied for food stamps to feed their three boys. Her husband returned, left, returned, left. Her life was a country music song.

“I believe in marriage,” she said, and she kept trying to save hers.

At age 30, she got a clerical job for the local sheriff, though she was terrified of the guns. She worked so hard hypnosis was tried to slow her down. A prosecutor called her Cinderella. He would say, “Slow down, Cinderella.”

The first errant husband Armbruster staked out was her own, her hero, when she was 30. He had returned home one more time but said his head hurt and he would spend the night at his parents’ house. He needed time, he told her, to think about their relationship.

When he pulled his car into his parents’ driveway at 3:30 a.m., the headlights found her sitting and seething on a snowbank by the garage.

Her first words were, “Tell me you were out walking a dog you don’t even own.”

Shortly after, in July 1979, she had a $1,500 garage sale and drove away in a rental truck with her sons, and without her husband, headed for Hampton.

The next year, she became the fourth woman hired by the Newport News police force. When she graduated 10th in her law enforcement class, her husband was in the audience seeking a reconciliation. They stayed together several good years, she said, but today his name is listed on her Rolodex under “S,” for SOB.

After a year in Newport News, she took a job as a federal police officer at the Norfolk Naval Station. Six years of frustration followed, she said, as the best assignments went to males. She won a sexual discrimination suit in 1986 and launched her detective agency full time the following January.

HER OWN AGENCY
Source of Solutions Investigations occupies a suite in a Virginia Beach office building. Armbruster is mainly a one-woman operation, with the help of her son, Bradley. She employs 12 part-time detectives, half of them women.

“I prefer women,” she said, “not because I am prejudiced but because women can get people to talk to them. People aren’t scared to open up their doors to a women. And women have intuitive powers.”

She estimated that fewer than 5 percent of the 8,300 licensed private eyes in Virginia are woman. She thinks some women are scared away from the profession because movies like “V.I. Warshawski” and TV shows like “Charlie’s Angels” give the impression that female detectives must be, as Armbruster put it, “pretty and sexy and all that garbage.”

Her initial goal as a full-time detective was to clear $1,200 month, her take-home pay as a police officer. After six months, she doubled that amount. Six months after that, she quadrupled it.

Her charge is $35 an hour, plus expenses. She has been known to work 24 hours straight.

In the movies and books, a detective’s clients come pleading for help. More often, it is a lawyer who calls Armbruster, seeking assistance in defending a case.

Armbruster doesn’t much believe in stakeouts. Instead, she thinks up a pretext for knocking on the door and beginning to chat.

She played a tape of a child abuse investigation. She had posed as a baby-sitter looking for work in order to get in the home. Although she may be loud and tough – even profane – in person, on the tape she is all sweetness and light as she says: “Oh, I see you smoke a little, too. I see your clip’s on your leg.” She was referring to a marijuana roach clip, attached to the suspect’s shorts.

Her remark implied that she, too, smoked marijuana, though actually she doesn’t even smoke cigarettes. She is fond of saying, “Sometimes you have to tell a lie to catch a liar.”

Ninety percent of what detectives do in the movies would cost them their licenses. For example, a detective cannot legally impersonate a police officer or anybody who actually exists.

But a detective can make up a company and pretend to work for it. Armbruster has all kinds of bogus business cards.

She is helping someone find an inheritance. She is looking to buy a puppy. She is a terrified woman being chased (she hires the person to chase her). She is conducting a survey for this or that.

No disguise is required, because nobody knows what she looks like.

And she is a bulldog.

One woman Armbruster is investigating has learned her identity but does not know which part-timer Armbruster might be sending to continue the investigation.

“She knows I might be coming as a Filipino, a black, a male,” Armbruster said. “She doesn’t know what I’m coming in, but she knows I’m around a corner somewhere.”

Description of illustration(s):
Staff color photo illustrations by BETH BERGMAN
Life as a private eye isn’t always safe. Just ask R.M. Armbruster,
who was shot at in this Portsmouth alley.
Although she mostly relies on a microphone sewn into her purse,
Armbruster has other tools of the trade.